Find me over at Tales From The Love Shaque!

Love you all,
Lisa 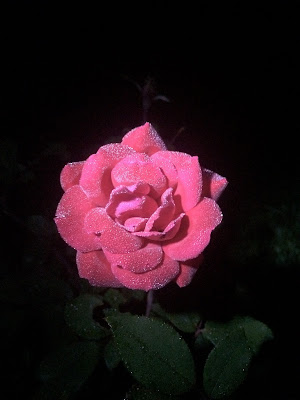 Posted by Lisa No comments:

I waffled about this way back in the day, but I've decided to combine this blog with my other one, Tales from the Love Shaque.

TFTLS is my personal blog of life & randomness so this will actually fit in there nicely.

I don't feel as tho I am maintaining 3 blogs as well as I should be (Maple Grove Cemetery is my 3rd and there's no question about that staying a separate entity!) and I really don't post here that often and there is a lot of repeating between here & TFTLS.

I haven't yet decided what I'm doing with this blog so as of October 1, it will be dormant.   This gives me time to figure out redirect links and all that stuff.

So wish me luck!
Posted by Lisa No comments:

It has never bothered me to go to the dentist before, but yesterday broke that record! 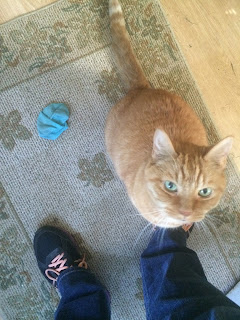 Gratuitous Chester picture,
meeting me at the back door with a dirty sock.

I called about a week and a half ago because I felt a chip in my tooth / filling / crown / whatever.  It was right along my gumline and my tongue kept hitting it.  I called and they couldn't get me in until yesterday.  Neat.  But it didn't hurt so I dealt with it.  Of course, that weekend the tooth broke in half.  But it still didn't hurt.   Come to find out, my tooth didn't hurt because it was one I'd had a root canal on a few years ago, so there was no nerve.

I went in yesterday and for some reason, the smell and taste of everything seemed 100 times worse than usual!   The dentist only gave me about 1/2 a shot of Novacaine to humor me, I probably didn't need it.  But damn if he didn't pull the needle out and drip some of that crap into my mouth. Gross.  Then he numbed my gums a little bit with some nasty rotten banana flavored stuff.   He used a laser and the most horrible smell ever was coming out of my mouth!!  I found out later he was using it to cut & cauterize my gums because there was decay below the gumline - so that was basically burning flesh I was smelling!  When they took the impressions - they used too much of that foam stuff and it shifted underneath my tongue so between that and the drool I couldn't swallow - my gag reflex went into overdrive.  They had to redo it with less foam.  The assistant dripped water down my neck after one of the rinses.  When they cemented the temporary crown onto the tooth, I could smell the cement before she even got it close to me and then I could imagine feeling the fumes wafting thru my mouth.  And it tasted horrible since you can't help but taste it, too.

So basically, it was one of the most awful appointments I've ever had and it wasn't even due to pain!  Then later when I got home, I had the worst chills!  Randy got home from work and I was sitting out on the patio in a hoodie and flannel pants - and it was around 90* and high humidity!  But I finally felt comfortable.  I would have been in bed before 9:30 if I hadn't had to wait for Angel to get home at 10 so we could move cars around.

Thankfully, I feel better today.  They said my mouth would be sore for a couple days from the laser and so far they're correct!  They had taken a picture of the area before cementing in the temp crown and had it up on the screen in the room.  I swear it a like a trainwreck.  I couldn't stop looking at it!  It was pretty disgusting.  I thought about taking a picture of the screen so I could share the grossness with Randy but I didn't.  You're welcome!  Because you know I would have shared it here, too!

So that was weird thing #1.  Weird thing #2 is that about a week ago I started taking these vitamin packets from GNC that the guy in there recommended.  They have a multivitamin, Triflex (their glucosamine sutff) and fish oil.  And my heel spur has really calmed down!  Before I would have to flex and stretch my feet before getting out of bed, or else I couldn't walk!  And if I sat too long at work, I'd limp for a few steps before it worked out.  I still have been doing the stretching before I get up, but it's more out of habit now.  Then I get up and can walk fine with only minimal ouchies.  I'm thinking it's the Triflex since I had been taking that for my knees (they grind) but stopped before my surgery and haven't taken any since.

So anyhoo.  Classes start back up at the studio next week, but I don't think I'm ready for Zumba yet!  It's tough to get motivated with these shorter days!

I went in Friday to get my "6" week checkup after the hysterectomy and got the blessing to resume life as normal!   The gyn said there are still some stitches up in there, but they'll dissolve soon.

So apparently the ovaries do indeed still work.  I was driving into work yesterday and couldn't get comfortable in the car.  Once I got to work I realized that I was cramping in my lower back like the good ol' days.  Then today my belly felt really heavy, along with being crampy.  I kind of wished I still was carrying the belly binder around in my purse, but I had put it away at home.   It felt weird to be feeling that way without having Aunt Flo visiting!

Other than that, I've been feeling pretty good.   We went camping last weekend and it was nice to indulge in some adult beverages by the fire (and on the boat!).  One thing I noticed that I thought was odd.  At home, when I wake up in the morning, I have to flex my feet and rotate my ankles and stuff to ease my heel spur before I get out of bed.  Saturday morning I woke up in the camper and walked just fine.  My heel didn't bother me all weekend.  I wonder why that was?  I didn't do anything unusual.  It rained half of Saturday so we just sat around under the awning and visited.  We played games like washer-toss later.  Monday morning at home wasn't too bad, but it hurt more than on Saturday or Sunday.

On the plus side, I got home from work this afternoon and relaxed for a while, then took the dog for a walk.  I was looking thru a tote in the garage for some fall leaves and stuff to put out to tide me over to Halloween decorating time, but I couldn't resist puppy-dog eyes. 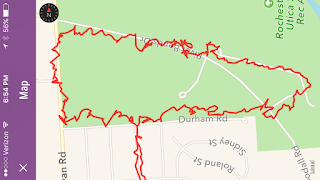 I somehow think Map My Walk's GPS is having issues.  It used to be, you know, accurate.
I'm pretty sure this is actually closer to 2.25 miles, but it said 4.1 miles and we did it in 47 minutes!

So that's the scoop here.  Nothing particularly exciting.  I'm trying to get motivated to get more activity in, but it sucks having to get up in the morning when its still dark!  I love fall, but I don't love the shorter days.  I'll be out mowing the lawn tomorrow so I should get close to 10K steps again easily.

Posted by Lisa No comments:

I go in for my 6 week checkup tomorrow, even tho it was 6 weeks on Monday since my hysterectomy.  This will be the physical exam to make sure I'm all healed inside and hopefully will get the blessing to resume normal life!

I confess I mowed the lawn.  I did half yesterday and the rest tonight.  I blame the other 2 bums in my house for not doing it for for me.  Yet again, I lost the waiting game and did something that they could have, but didn't.  So if I have ill-effects from this - you know who will get the evil eye! 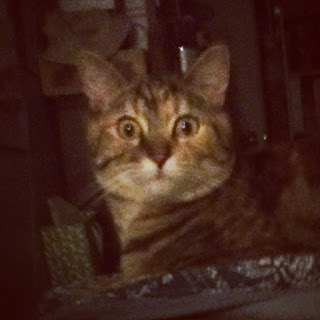 I'm actually feeling quite good.  I really haven't had any significant belly pain or anything since like week 2 post op.  Twinges here & there, but that's all.  It's hard to remember that I have had significant internal organs removed!  Of course I'm feeling some aches right now since I always do after mowing the lawn, but nothing that feels surgery-related.

Anyhoo, I got the guilt trip, "we miss you" card from Weight Watchers yesterday.  I'm ready to go back, I think.  I'm shooting for the September 6 meeting.  That'll be 2 months since I went last.  I don't feel guilty about missing 2 months.  I had cancelled my credit card back in June (someone in Indiana tried to charge $200 worth of stuff at a Dollar Tree on it!!) and forgotten that my monthly pass was paid for on that.  I got emails from WW about it while I was in Charleston with Miss Angela & her dance team, but they went into a special email folder that I didn't look at when I was on my phone.  So yeah, my monthly pass got cancelled.  I did get 2 meetings in after Charleston before we figured out what had happened, but by then I knew I was having surgery, so I let it be. They have some good deals going on, so I'll have to take advantage.

Sigh.  What a time to go back, right when this has happened... 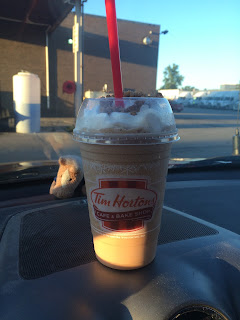 I'm going to have to start planning my food better.  I've been eating oatmeal for breakfast so long that I'm getting tired of it.  I switch between strawberries and PB2 and occasionally maple syrup in it for flavor, but it's still getting old.    But it's quick & easy to make the night before and take it to work with me to eat at my desk in the am.  But yawn!

I've been getting a few walks in, and dragging Randy along with me.  I know he's just going to humor me, but it doesn't hurt him to go, either!  I noticed my FitBit step count has gone up each week, so that's a good thing!  My heel spur has been acting up, but I wonder if its because I haven't been taking my Triflex (glucosamine stuff from GNC) since the surgery. I haven't had any knee issues ~KNOCK ON WOOD~ but this has been annoying.  I have to flex & point my feet before I get up in the morning or I seriously cannot put weight on my right foot at all!  Guess I should restock up on that.

So it's getting late, I'll post again after my checkup!
Later!

#SnS
Posted by Lisa No comments: